Here you will find non-commercial information and suggestions for the crossing of the French Alps on the GR5, one of the world’s most spectacular long distance hikes.  Additionally, two pages provide information sources and vocabulary for  walking the entire GR5, from Holland to the Mediterranean.

Please let me know of errors or omissions on  this web site.  I now rely on  input from other walkers (as well as the Internet) to keep these pages up to date.  Thank you, David May, author@grfive.com

For information on my background and my other web sites, please see this page: About the author

The GR trails (grande randonées, that is, long distance trails) throughout the Alps mostly use the same system of trail marking (“waymarking” in British English). A GR is marked with a white rectangle sitting above or upon a red rectangle.(Local, non-GR trails use other color combinations, or a mark of one color.) If two GRs (Grand Randonnées) cross or branch, the number of the GR will be written on each trail.

You will find the waymarks on trees, on stones, on signs, on walls—wherever there is any question as to the trail, and often just as reassurance that you are on it. I have found it difficult to get off the proper GR trail, but it can happen. If you do, backtrack to the first visible trail mark, or use a map to regain the correct route. Also, there are a a few spots here and there in the Alps where you might want the reassurance of a waymark, and there is not one. So a map or guide book —while not an absolute necessity—can be very helpful. 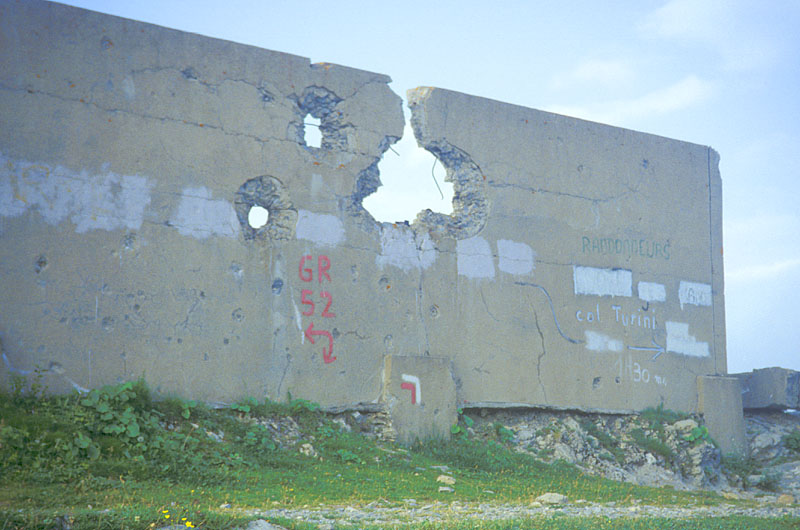 Upcoming turns of a GR are indicated by four perched rectangles, from top to bottom white, red, white, red. At the turn it self, an arrow will indicate the direction of the turn, and usually, should you miss the turn, the incorrect trail will initially be marked by a red “x” .

For those who are following the GR5 from Holland, in Luxembourg and in Alsace there are separate marking systems that predate the GR5. Obtain local maps or guides: In the Vosges mountains of Alsace the maps published by the Club Vosgien are best.

Obviously, where the GR trail markings diverge from the trace on your map or Topoguide, the markings take precedence. This means the GR has been rerouted. However, during the Alpine crossing, it is quite unlikely that the GR routing will have changed very much.